Welborn Lee "Tiddly" Ashby was a United States Navy sailor who was killed when the Japanese attacked Pearl Harbor on December 7, 1941. He was the first US servicemen from Ohio County, Kentucky who died in World War II. His remains were identified on November 4, 2019.

At about 7:48 AM on December 7, 1941, the Imperial Japanese Navy Air Service conducted a surprise military strike against the United States at the naval base in Pearl Harbor, Hawaii. Johnson was stationed on the USS West Virginia when the attack occured. The ship was hit with torpedoes, but thanks to the crew taking counter-flooding measures, the USS West Virginia came to a final rest on the shallow harbor floor and did not capsize. Ashby was killed in the process, though his exact circumstances are not known. His remains were located between 1941-1944, but not identified. As a result, he was considered Missing in Action while his remains were buried in the Punchbowl at the National Memorial Cemetery of the Pacific in Honolulu, Hawaii.

Overall, 2,335 Americans were killed in the attack, 106, including Ashby, were on the USS West Virginia. The surprise attack led to US President Franklin Delano Roosevelt to declare December 7, 1941, "a date which will live in infamy". The following day, the US Congress declared war on Japan which led to the United States' formal entry into World War II.

After his death, Ashby was awarded the Purple Heart. He was memorialized in Court 5 of the Courts of the Missing at the Honolulu Memorial in Honolulu, Hawaii and at Centertown Cemetery in Centertown, Kentucky. Additionally, the American Legion in Centertown is named in his honor as Welborn Lee Ashby Post 296.

Between June and October of 2017, the Defense POW/MIA Accounting Agency exhumed thirty-five remains of servicemen killed on the USS West Virginia who were buried in the Punchbowl. Through dental and anthropological analysis, circumstantial and DNA evidence, "Tiddly" Ashby's remains were identified on November 4, 2019. He will be buried in his hometown on May of 2021. 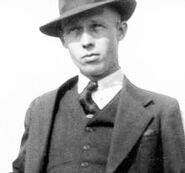 Retrieved from "https://unidentified.wikia.org/wiki/Tiddly_Ashby?oldid=144038"
Community content is available under CC-BY-SA unless otherwise noted.