Unidentified Wiki
Register
Don't have an account?
Sign In
Advertisement
in: Male, Killed in action, Cases with Wikipedia articles,
and 11 more

Wesley Ernest Graham was a United States Navy sailor who was killed on the USS Oklahoma when the Japanese attacked Pearl Harbor on December 7, 1941. His remains were identified on June 5, 2020. 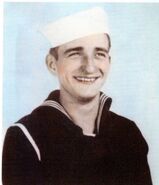